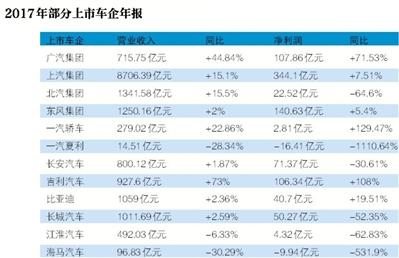 According to the 2017 annual report, the profits of GAC Group and Geely Automobile climbed by over 70%, while those of Haima Motors and JAC Automobiles fell by more than half.

In 2017, China's auto market has intensified its reforms, and the growth rate of production and sales has further slowed down. Faced with increasingly fierce market competition, the polarization trend of performance in car companies is even more pronounced.

In addition, due to the adjustment of product structure, sales volume decline, and the subsidy of new energy vehicles, many companies with independent branded listed vehicles have experienced a significant decline in their performance. Among them, Haima Motors lost nearly 1 billion yuan, and the profits of Great Wall Motors and Jianghuai Automobiles fell by more than half.

At the same time, with the support of policies, some car companies have seen rapid growth in the new energy vehicle sector. It is worth mentioning that in the performance contribution of major auto groups, the autonomous passenger car segment has begun to bear more weight.

As an important joint venture company and subsidiary of GAC Group, GAC Honda, GAC Toyota, and GAC Passenger Car have accelerated their product launches and optimized their product mix by combining their own conditions and industry development trends to achieve a significant increase in automobile production and sales.

According to the data, in 2017, GAC Group's automobile production and sales volume exceeded 2 million for the first time, an increase of 21% year-on-year, and its market share increased to 7%. Among them, Guangzhou Automobile sold more than 508,000 vehicles sold, an increase of about 37% year-on-year, accounting for more than 25% of total sales. In recent years, GAC Chuanqi has introduced a number of models including cars, SUVs, and MPVs, and its 2017 production and sales growth exceeded that of the joint venture company. Among them, the sales volume of Chuanqi GS4 has remained at a high level, and the accumulated sales of the GS4 have reached 800,000 units for more than two years. The Chuanqi GS8 has sold more than 10,000 units for several consecutive months. In the year of 2017, the cumulative sales volume exceeded 100,000 units.

However, judging from the report, the joint ventures of Guangzhou Automobile Honda, GAC Toyota, Guangzhou Automobile Mitsubishi and other companies still have a large impact on the operating results of GAC Group. The data shows that in 2017, sales of joint ventures such as GAC Toyota and GAC Honda reached nearly 1.5 million vehicles. It accounts for nearly three quarters of the total sales.

SAIC Group stated that its growth momentum in 2017 was mainly due to the high sales growth of its own-brand vehicles and the new car cycle of the joint venture brand, which contributed a stable return. In addition, SAIC's sales of new energy vehicles doubled, with annual sales of 64,000 units, a year-on-year increase of 156%.

According to the financial report of Beijing Automotive Co., Ltd. (hereinafter referred to as Beijing Auto), in 2017, Beijing Automotive achieved sales revenue of approximately RMB 134.158 billion, an increase of 15.5% year-on-year, which was mainly attributable to the increase in Beijing Benzâ€™s revenue.

The four business segments of BAIC Group totaled 1.346 million vehicles. Among them, Beijing Benz and Fujian Benz maintain a good momentum of development. Data show that in 2017, Beijing Benz related revenue increased from 85.312 billion yuan to 116.772 billion yuan, an increase of 36.9%, mainly due to the continued rapid growth in sales of Mercedes-Benz Beijing, vehicle sales of 423,000, an increase of 33.3%. Fujian Benz achieved sales of 22,000 vehicles, a year-on-year increase of 79%.

The sales of Beijing brands and Beijing Hyundai declined. Since the official launch of the Beijing brand, the main brand of the motherboard has achieved sales of 236,000 passenger cars. In response to the slowdown in the growth of the domestic passenger car industry and the adjustment of preferential taxation policies for vehicle purchases, the Beijing brand has provided additional promotions to the market with revenue of 17.385 billion yuan. Beijing Hyundai has been greatly affected by non-operating factors. It has achieved sales of 785,000 passenger cars throughout the year.

In the report, Dongfeng Group Chairman Yan Yanfeng mentioned that commercial vehicles have maintained double-digit growth and operating efficiency has improved substantially; sales of new energy vehicles have achieved strong growth on the basis of risk control. In addition, the heavy-duty truck market in 2017 is booming, especially the proportion of tractor sales is increasing rapidly. This may also be an important reason for the growth of commercial vehicle revenue.

In addition, the report also mentioned that in 2017 Dongfeng Group passenger vehicles put more than 20 new models throughout the year; sales of mid- to high-end models accounted for an increase; the proportion of SUV increased by approximately 6.1 percentage points. Cycling income and bicycle profits increased at the same time. The annual retail sales volume was higher than the wholesale volume, which resulted in a decline in vehicle inventory, and a significant reduction in the efficiency of the entire value chain.

FAW Cars and FAW Xiali, two listed auto companies under FAW Group, had the opposite profitability in 2017. FAW Car had a net profit of 281 million yuan and FAW Xiali had a net loss of 1.641 billion yuan.

FAW Car's 2017 annual report shows that in 2017, FAW Cars achieved operating revenue of 27.902 billion yuan, an increase of 22.86% year-on-year; the average operating income of the auto vehicle industry rose 14.17%; the net profit attributable to shareholders of listed companies was 281 million yuan, an increase from the same period of last year. 129.47%; The average net profit growth rate of the auto vehicle industry is -0.86%, and the company's earnings per share is 0.17 yuan.

However, the situation of FAW Xiali is very optimistic. According to the 2017 annual report of the company published by FAW Xiali, its revenue in 2017 was 1.451 billion yuan, a year-on-year decrease of 28.34%; the net profit loss was 1.641 billion yuan, which turned from profit to loss year-on-year, and the company's profit was 162 million yuan in the same period last year.

FAW Xiali said that the company's product structure adjustment has not yet been completed, the current product production and sales scale is low, profitability is weak, and due to the need for continuous investment in the preparation of new products, the current operating pressure is greater, the dealer and supplier system also bear Certain pressure. On March 11, 2018, Chunpeng A50 sedan has been put on the market, Chun Pai CX65 cross-border car and A-SUV products will also be launched during the year, when the product line will be very rich, it is expected that the scale of production and sales will also be improved. .

Sales decline in profits decreased by 30.61%

The performance report released by Changan Automobile shows that from January to December 2017, the company achieved operating revenue of RMB 80.012 billion, an increase of 1.87% year-on-year; net profit attributable to shareholders of listed companies was RMB 7.137 billion, a year-on-year decrease of 30.61%, mainly due to the joint venture The decline in corporate investment income.

Changan Automobile mentioned in its annual report that, in 2017, Changan Autoâ€™s own product sales volume fell 5.66%, and its operating income was 80.01 billion yuan, an increase of 1.87% year-on-year, mainly due to the increase in the average selling price after product replacement.

BYD said that the main reasons for the change in profit included the decline in sales and revenue of the Group's traditional automotive business during the year, which brought pressure on the Group's earnings growth. In terms of solar energy business, competition in the market is still intense during the year, and solar energy business still has a large negative impact on the Group's earnings. In addition, BYD Chairman Wang Chuanfu once said in his 2017 performance that the new energy subsidy policy changes and market competition have affected the company's overall auto business profitability.

The report shows that in 2017, BYD Group's sales of new energy vehicles exceeded 110,000, an increase of over 15% year-on-year. However, due to the late launch of the new models and the impact of the product cycle of the old models, in 2017, the Groupâ€™s sales of fuel vehicles reached approximately 245,000 vehicles, a year-on-year decrease of 24.62%. At the same time, the gross profit margin of BYD's related products decreased by 3.93% compared with 2016. In the annual report, BYD is expected to be affected by the subsidy for new energy vehicles and the fierce competition in the traditional auto market. It is expected that the net profit range in the first quarter of 2018 will be approximately 50 million to 150 million yuan, which will decline by 75.24% year-on-year to 91.75%. .

JAC SUVs, which are the mainstay of sales volume, fell 55.96% year-on-year. In 2016, two small SUVs, the Refine S3 and Refine S2, accounted for nearly 70% of sales of JAC passenger cars. However, as competition has intensified, the performance of the two vehicles has become increasingly unfavorable. Among them, JAC's sales of SUV models, the Refine S3, have fallen from monthly sales of 20,000 units to monthly sales of more than 1,000 vehicles. In June of last year, JAC launched the new compact SUV Refine Air S7 to change the unfavorable situation of its SUV decline. However, the sales of the Ruifeng S7 in the first month of the listing were 3,203. In January of this year, the sales volume was 1,103 units. In February, the sales volume was only 395 units.

Geely Automobile released its 2017 financial report, showing that the company achieved revenue of 92.76 billion yuan in 2017, an increase of 73% year-on-year; net profit attributable to shareholders of listed companies was 10.634 billion yuan, a year-on-year increase of 108%. Diluted earnings per share was 1.16 yuan.

According to Geely's "2020 Strategy," Geely's sales target for cars is 1.58 million units in 2018, a year-on-year increase of 27%. In 2018, a variety of new energy products, including plug-in hybrids and pure electric vehicles, will also be launched in the new energy field.

Sales volume decreases profit by half

In this regard, in the announcement of performance reduction, Great Wall Motor will attribute the main cause to the following: The company through the purchase of cars and other activities to benefit customers, promote existing products, affect the level of income and gross profit; through the Internet, television, outdoor All media and other media promote branding and product promotion, resulting in a larger increase in advertising fees. In order to continue to increase the competitiveness of SUV products, investment in R&D continues to increase, resulting in an increase in research and development expenses.

Haima Motor Co., Ltd. proposed in its annual report that due to the combined effect of many factors, such as the slowdown in the growth of the industry, intensified market competition, and the adjustment of internal product structure, the companyâ€™s sales volume in the first three quarters of the year declined significantly. Although measures were taken in the fourth quarter to increase investment in resources such as marketing and public announcements, they did not achieve the desired results. In 2017, the total sales volume of the companyâ€™s automobiles was more than 140,000, which was a significant year-on-year decline.

In addition, Haima Motor stated in its annual report that during the reporting period, although the companyâ€™s operating performance has suffered significant losses, it has made significant progress in other areas. For example, export sales have been significantly increased. In 2017, Haima Automobile exports The sales volume was 17,600, an increase of 307% over the same period of last year, especially in the Iranian market, ranking third in the sales volume of Iranian Chinese branded SUVs.